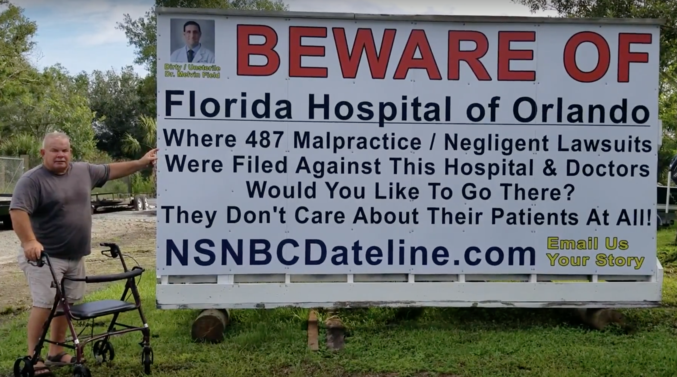 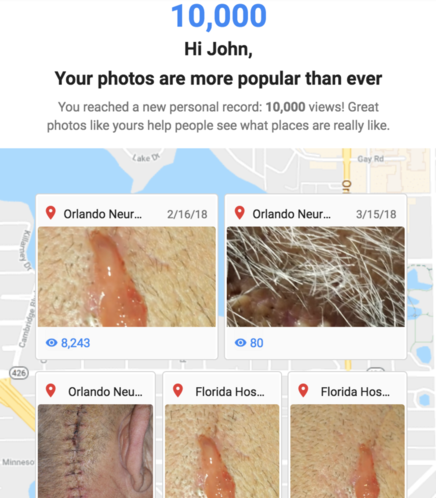 Neurosurgeon Dr. Melvin Fields performed an unsterile, botched brain operation on me. Approx. 4 months after, I returned to Florida Hospital of Orlando with a severe infection in my head. The incision site had broken down from the infection and pus, blood, and CSF fluid was oozing out of the incision. I have sought help many times at Florida Hospital of Orlando when the pus and CSF are oozing from the incision site. Each time I was admitted and administered antibiotics from the ICU and then sent home within 3-5 days.

Approximately 7 months ago, I was readmitted with a severe infection at the incision site. I was admitted immediately. I was prepped for an operation the following morning. The goal was to eradicate the germ that was given to me by Dr. Melvin Field at Florida Hospital Orlando during an unsterile brain operation. The germ was inside my head and by removing the graft on my skull and the mesh, they assumed this would resolve the problem. Obviously, it was too late. Approx. 3 months after this botched life and death operation, I had returned to the ER with a severe infection at the incision site again. With my insistence, prior to administering antibiotics, the ER doctor at Florida Hospital of Orlando sent the specimen for culture to the lab. A day and a half later, the PA came into my room in the ICU and asked me how I was doing. I asked her what kind of infection did I have. She stated, "Lets see." As she looked at the computer she noticed that Dr. Field's had never ordered the specimen to be cultured as usual. So, she herself ordered the labwork to be done. The following day I was released from the ICU and sent home with 28 tablets of Keflex in 750 mg. Approximately, three to five days later, my daughter went down to Florida Hospital of Orlando, and got all the test results from the records department. Upon receiving these records we were shocked to find out that I had tested positive for rare gram cocci, and I had no graft on the rear of my skull or a mesh protecting it. This infection was less than 1 millimeter from my brain, and it could kill me instantly.

To this day, I have never received a call from Florida Hospital of Orlando or the so-called neurosurgeons, that I was being treated by, to find out how I was feeling and to inform me that I had tested positive for rare gram cocci. I have sent 11 emails/letters over a period of 9 months, and two hand delivered letters to the administration, and to the C.E.O. of Florida Hospital of Orlando, and to the board members begging and pleading for someone from this administration to supersede in this matter and I have never been contacted except from their Risk Management Officer.

This is extremely sad that this kind of medical treatment is being allowed in 2018. I released this video to educate the people of what kind of unsterile, unsanitary conditions that you may be subjected to while getting an operation at Florida Hospital of Orlando, while you are lying unconscious in their operating room at the hands of a sloppy, dirty Neurosurgeon that doesn't scrub up and assumes that the rules and regulations of the board of medicine doesn't apply to him. Every day I suffer from severe, debilitating headaches, dizziness, and nausea along with the occasional CSF and pus oozing from my right side of my head and my ear, and my face becoming swollen from the collection of CSF, while Florida Hospital of Orlando and Neurosurgeon Dr. Melvin Fieldrefuse to acknowledge it. They have blackballed me and abandoned me after giving me a botched, unsterile operation and left me with an infection inside my head that I will live with the rest of my life until it kills me. - Scott

Click here to go to:  NSNBCDateline.com to learn more about Dirty Dr. Melvin Field in Orlando, Florida and sign our petition!